Indian history is full of rising and many big kingdoms as well as empires. There are so many such monuments of Indian history which you can surely visit at least one time when you are in India. Such Indian monuments are just beautifying our nation’s pride and heritage all around the world. You will at least one such impressive Indian monument in every state of India. So, you mean their 28 monuments in India?? Well, NO! There are a lot more than this number. Trust Me!

These historical monuments of our country India exhibits the glory of the country and these monuments are a very important part of our country’s cultural as well as historical heritage. TAJ MAHAL of Agra, Uttar Pradesh is considered as the most impressive monument of India. Taj Mahal is the Fifth Wonder of the World too. This Indian monument is one of the world’s most symmetrical structures. It is an ivory-white marble mausoleum on the bank of holy Indian River Yamuna. Taj Mahal was commissioned by the Mughal Emperor Shah Jahan in the year 1632. It is believed that the emperor made Taj Mahal in the memory of his beloved queen Mumtaz. It is also known as Mumtaz Mahal. Taj Mahal is the tomb of queen Mumtaz too. Listed here top five most impressive and world widely famous Indian monuments after Taj Mahal –

The Statue of Unity is located in Sardar Sarovar Dam, Kevadia in the Indian state of Gujarat. It is a colossal statue of the worldwide famous Indian independence activist and Indian statesman Sardar Vallabhbhai Patel. He was the first home minister of independent India and the chief Adherent of the father of the nation Mohandas Karamchand Gandhi. The height of the statue of unity is 182 meters (597 feet) from the sea level and the architect behind this giant engineering marvel is Mr. Ram V. Sutar, basically, he is the designer of a statue of unity. The statue of unity is the world’s tallest statue as well. It is located exactly on a river island, which is facing towards the Sardar Sarovar Dam on the holy River Narmada in Kevadia, Gujarat. The project of the statue of unity was first announced in the year 2010 and the construction of the statue was started in the month of October 2013 by an Indian multinational conglomerate company called “Larsen & Toubro Limited”, who received the contract for INR 2989 crore. The statue of unity was inaugurated by the Indian Prime Minister Mr. Narendra Damodardas Modi on 31st October 2018 on the occasion of 143rd birth anniversary of Sardar Vallabhbhai Patel. 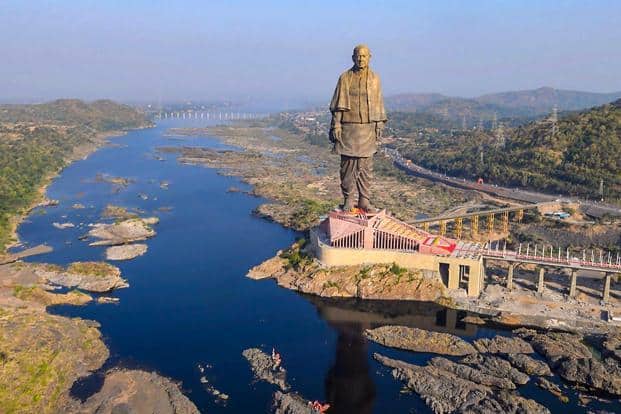 Chittor Fort is located in Chittoor Fort Road, Chittorgarh in the Indian state of Rajasthan. The Chittor Fort is also known as Chittorgarh Fort. This fort is one of the largest forts in India and a UNESCO (United Nations Educational, Scientific and Cultural Organization) world heritage site too. The Chittor Fort spreads over a hill which is 180 meters (590.6 feet) in height and the fort is spread over an area of 691.6 acres which is above the plain of the valley drained by the Berach River. The Chittorgarh Fort serves as the erstwhile capital of Mewar. This fort is reputed to have braved the long eight-month siege by Alauddin Khilji, who was the second and most powerful & cruel ruler of the Khilji Dynasty in the year 1303. Alauddin Khilji defeated Maharawal Rana Ratan Singh, the ruler of Mewar by cheating to achieve his queen Rani Padmawati and his kingdom. You will also find a particular palace called “Padmini Mahal” inside the fort. This palace was made in the honour of Rani Padmavati.

The Humayun’s Tomb is located on Mathura Road opposite Dargah, New Delhi. Humayun’s Tomb was the first garden-tomb on the Indian subcontinent. This tomb was commissioned by the first wife of Mughal emperor Humayun, Empress Bega Begum in the year 1570. The Humayun’s Tomb was designed by Persian architects namely, Mirak Mirza Ghiyas and his son Sayyid Muhammad, which was chosen by Mughal Empress Bega Begum. The Humayun’s Tomb is the best example of Mughal Architecture embedded with Persian Architecture. White marble and red sandstone are used in the building of this historical tomb. Humayun’s Tomb is a UNESCO (United Nations Educational, Scientific and Cultural Organization) world heritage site along with a masterpiece of Persian architects. So, if you are in the country’s capital and do not visit Humayun’s Tomb, then you would be missing one of the best historical heritage site that our country offers.