This rare hotel is very much trending among the GOT fans all around the world and it is located in Finnish Lapland near Kittilä, Finland. This hotel is built by HBO Nordic in association with Lapland Hotels Snow village. The Lapland Hotel Snow village is a very popular ice hotel which comes up with a new theme every year for their customers all around the world and this time they got “Game of Thrones” theme. This hotel lies at a distance of 200 kilometers above the Arctic Circle, and one and a half hour drive away from Helsinki.

20 million kilograms of snow and 3, 50,000 kilograms of crystal clear natural ice were used for the construction of this hotel during winters and this hotel covers an area of 20,000 square feet. There are 24 rooms and 10 suites for the customers in this GOT themed hotel and this hotel is completely designed by the ice sculptors from Ukraine, Poland, Russia and Latvia. All 24 rooms and 10 suites of this ice hotel features an ice figure related to the very popular show “Game of Thrones”. 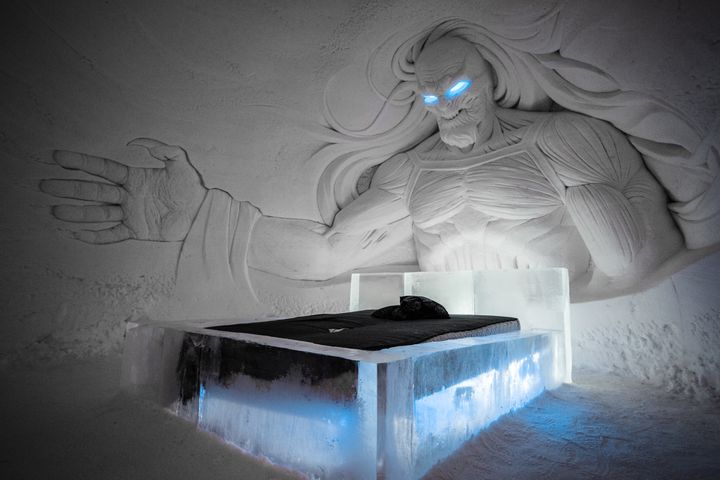 Icy recreation of such figures is the Hall of Faces, which is seen in Braavos’ house of Black and White is the popular one among all the ice figures. Replicas of the Iron Throne which is guarded by the mountain and a giant blue-eyed white walker of GOT series over a bed in the rooms are the popular ones.

The temperature inside this ice hotel is quite low which reaches minus five degrees. Keeping this major fact in mind, this ice hotel provides high-quality thermal sleeping bags to their customers and also provides hot berry juice which keeps them warm in the hotel. This hotel also includes amenities like a dragon-themed arctic bar which serves drinks in ice glasses, a restaurant which is having frozen dining furniture, a cinema and a chapel.